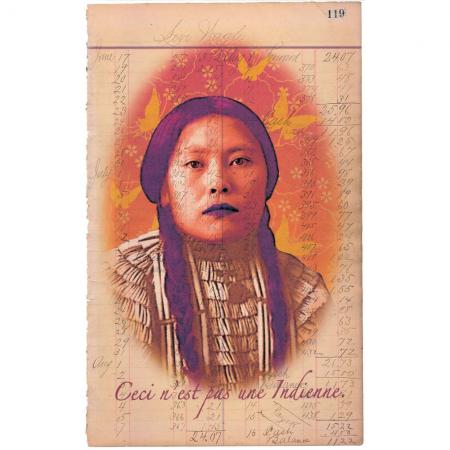 A version of this print was purchased by The British Library for their permanent collection.

A version of this print was purchased by The British Library for their permanent collection.

This artwork references a famous piece by the Belgian artist Rene Magritte titled ‘Ceci N’est Pas Une Pipe’. This portrait shows the artist dressed in Plains Indian attire, inappropriate for  her Jemez Pueblo heritage, – commenting on the stereotyping of Native peoples by an often poorly informed non-native population. The asian patterns in the background reference the artist’s maternal heritage. Debra Yepa-Pappan brilliantly demonstrates her knowledge of European art, language and culture whilst highlighting her experience of mainstream America’s ignorance about the many different Native American cultures.