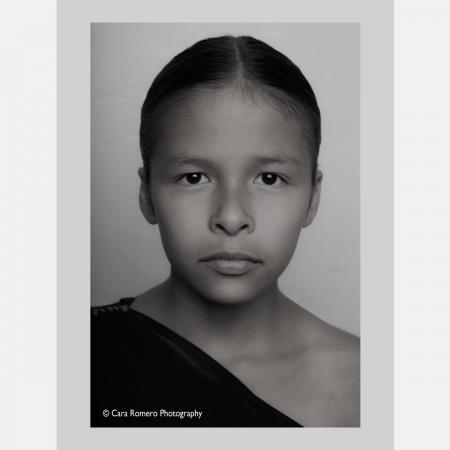 “Iconic photographic images of Native Americans that pervade mainstream fine art collections have been captured mostly by non-Natives. Today, more Native Peoples are crossing the “digital divide”, as well as, socio-economic gaps to begin mastering the techniques of film and digital media. There is a certain trust that is evoked between the subjects and photographers. The subjects are safe to express themselves and not be exploited. It is a subtly that is hard to articulate, but can be observed ever so powerfully in these photographs.” CR 2015

Cara Romero is a fine art photographer whose work reflects a diverse training in film, digital, fine art, journalism, editorial portraiture and commercial photography. Cara has won several awards including ribbons at major art markets and the “Visions for the Future” award from the Native American Rights Fund. Raised on the Chemehuevi Valley Indian reservation along the California shoreline of Havasu Lake in the heart of the Mojave Desert, she now lives and works in Santa Fe, New Mexico with her husband celebrated Cochiti potter Diego Romero and their children.

Cara Romero is a born visual storyteller with a distinctive lens shaped by years of study, a visceral Indigenous and non-Indigenous cultural memory, collective history, her own personal experience and a compassionate and keen sense of visual narrativity. Romero is the proud mother of two boys, Paris and Noel, the wife of the dynamic and highly regarded contemporary Pueblo artist Diego Romero, and the daughter of a Chemehuevi father and a German-Irish mother. Romero studied photography at both the Institute of American Indian Arts in Santa Fe, New Mexico and Oklahoma State University and studied cultural anthropology at the University of Houston.

Her photography – a mélange of fine art and documentary-style – is a sometimes whimsical, often complex interplay of social commentary, adaptation and examination of modern culture with a distinctly modern Indigenous world view. It is multi-layered, meant to be experienced from a multi-verse of perspectives and invites viewers – mainstream and connoisseurs of Indian art alike – to enter into its nuanced visual architecture with an open mind, and a willingness to abandon pre-conceived notions about Native art, culture, and peoples.

“Native American art is as diverse as our people. Photography is a newly emerging art form for contemporary Native American artists who are creating groundbreaking, heart clenching work from deep inside our indigenous identities, cultures and landscapes.” CR