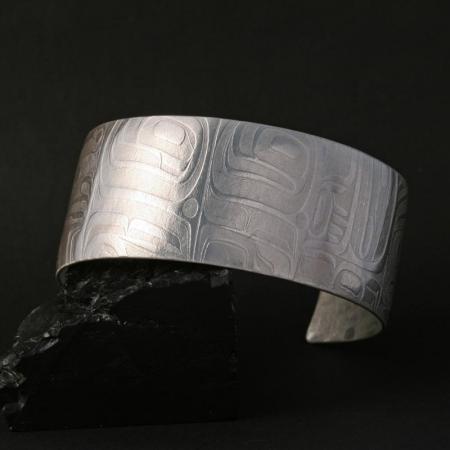 Gwaai Edenshaw is a Haida carver, multi disciplinary artist and film maker. His ‘Regalia line’ of patinised copper and sterling silver jewellery has subtly rendered Haida formline elements hand embossed into the precious metals. This impressive silver bracelet measures 27mm in width and looks great on both men and women.

“What I am playing at there is sort of an aesthetic  that I really love – the remnants of things that are in museums, or totem poles and buildings that have weathered over time. I find that to be a beautiful aesthetic.” Gwaai Edenshaw.

The Traditional homeland of the Haida Nation is a group of Islands off the Pacific Northwest coast of Canada, known as Haida Gwaii meaning “Islands of the Haida people”.