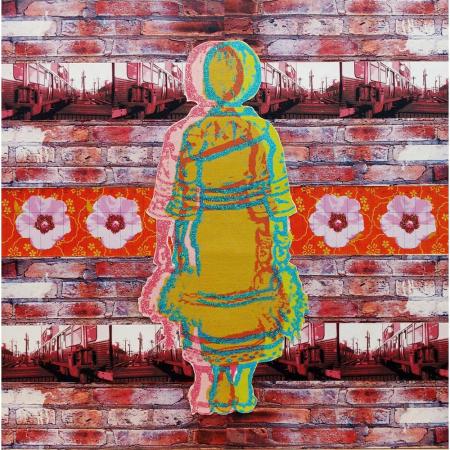 This work depicts a Jemez Pueblo dancer (the artist’s daughter) superimposed over alternating images of the Chicago “L” train and the hibiscus, national flower of Korea. In this work, the artist references both her Native American and her Korean heritage and her identity as citizen of Chicago.

Living in Chicago, I am influenced by contemporary and urban culture. A lot of my work, specifically my digital images of myself with my certificate of Indian blood, deal with the issue of my own identity. Growing up in an urban environment where every culture in the world exists, where different Indian Nations from around the country exist you find yourself questioning who you are and where you belong in the whole scheme of things. Fortunately, because of my parents and their own strong ties to their cultures, I have a strong sense of self. I know who I am and where my people come from. I could pinpoint exactly where my ancestors come from on both sides of my family.” Debra Yepa-Pappan
Debra’s colourful reflections of what it means to be of mixed descent in modern United States is a reminder of the more than a million Native Americans living in cities whose heritage is multifaceted, complex and at times problematic. Putting a clear accent on mis-recognition, invisibility, and ethnic clichés, Debra’s art celebrates with her distinctive use of a vibrant palette the manifold and often ambivalent meanings associated with being a ‘minority’ and ‘having’ an identity in urban contexts. This is what makes her art relevant beyond the confines of her experience, reaching out to all those who are coming to terms with the very notion of identity.
Debra’s art is informed by the complexities of identity that she articulates in a series of paintings in which her dual heritage emerges with balanced sensitivity and delicate chromatic flair. Underlying her use of words and images is the desire to challenge received knowledge about who has the right to define individuals and groups alike. Her playful and yet erudite references to illustrious precedents (e.g. ‘Ceci n’est pas une pipe’ by Rene Magritte) confronts us with the treachery of images that frequently renders Native Americans in cities entirely invisible to most people used to common depictions of American Indians. (Dr Max Carocci, British Museum)