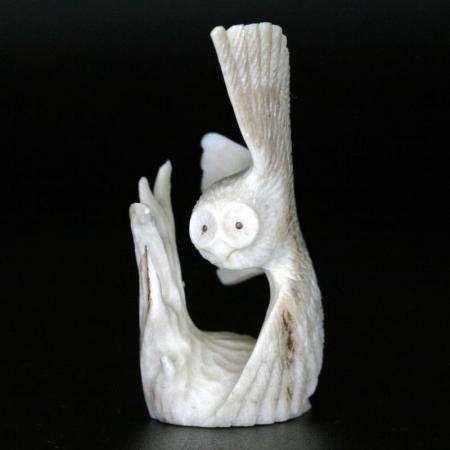 This exquisite miniature barn owl  is intricately carved from antler by  Zuni carver Ruben Najera. Ruben comes from a family of Zuni fetish carvers and he is known for the extraordinarily fine detail and accuracy of his work. This exceptional miniature barn owl carving measures just 40mm in wingspan. A true work of art.

This exquisite miniature barn owl  is intricately carved from antler by  Zuni carver Ruben Najera. Ruben comes from a family of Zuni fetish carvers and he is known for the extraordinarily fine detail and accuracy of his work. This exceptional miniature barn owl carving measures just 40mm in wingspan. A true work of art.