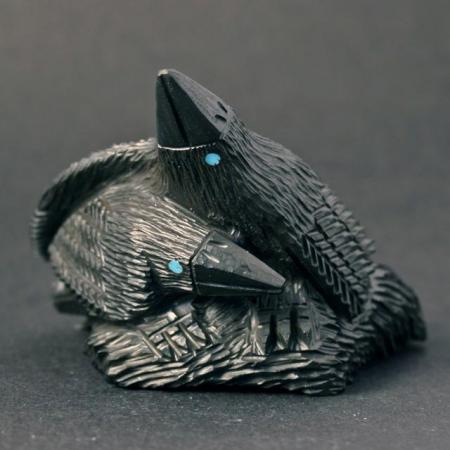 This splendid Zuni fetish carving represents two Raven lovebirds embracing. They are intricately carved from black jet by one of our favourite Zuni carvers Destry Suitza. Destry is known for his extraordinarily fine detail as seen here in the carving of a these delightful Ravens. A true work of art. This exceptional Zuni fetish carving measures 3.5cm in height.

This splendid Zuni fetish carving represents two Raven lovebirds embracing. They are intricately carved from black jet by one of our favourite Zuni carvers Destry Suitza. Destry is known for his extraordinarily fine detail as seen here in the carving of a these delightful Ravens. A true work of art. This exceptional Zuni fetish carving measures 3.5cm in height.