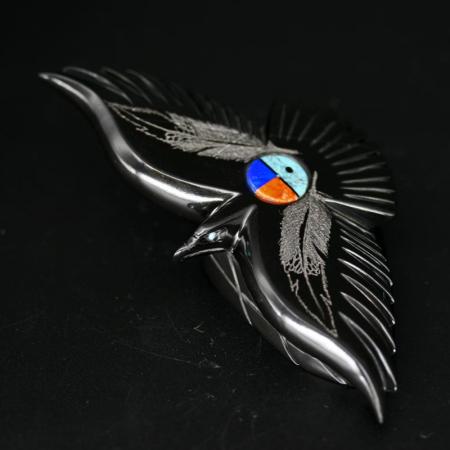 This majestic soaring eagle fetish is skilfully hand carved from polished black marble by Hiram Peynetsa. Eagle is decorated with engraved eagle feathers and a Zuni Sunface of turquoise, coral and lapis lazuli. This magnificent sculpture is clearly signed on the base. Eagle wingspan measures 10.2cm from wingtip to wingtip.

This majestic soaring eagle fetish is skilfully hand carved from polished black marble by Hiram Peynetsa. Eagle is decorated with engraved eagle feathers and a Zuni Sunface of turquoise, coral and lapis lazuli. This magnificent sculpture is clearly signed on the base. Eagle wingspan measures 10.2cm from wingtip to wingtip.