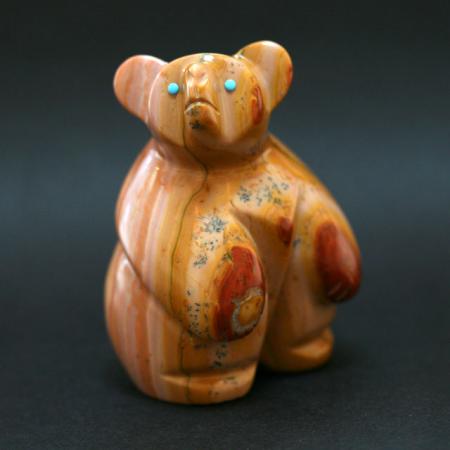 This adorable, chubby bear measures 7.5cm in height and is carved from dolomite by Vernon Lunasee.

(Little bear not included – please contact the gallery for details).

This adorable, chubby bear measures 7.5cm in height and is carved from dolomite by Vernon Lunasee.

(Little bear not included – please contact the gallery for details).

The Zuni People are known for their fine pottery, jewellery and also for traditional, miniature animal and bird carvings known as ‘fetishes’. A fetish is a ritual object, empowered by ceremony and imbued with spirits. Such power objects, when appropriately honoured are believed to assist in healing, hunting, fertility and protection.
Zuni Fetishes are animal carvings that have been used by the A:Shiwi (The People) for over a thousand years. Originally fetishes were found objects that resembled animals and were then adorned with offerings or medicine bundles. Sometimes these natural forms were further enhanced to emphasise the appearance of the animal spirit within.This process gradually developed into a carving tradition of beautiful, characterful and sometimes intricate ritual objects.
The carving of a fetish is a way of honouring and calling upon the animal spirit for assistance. By honouring the animals and acknowledging their special “medicine” or natural gifts, we can recognise these attributes within ourselves. When wearing or carrying a fetish or placing it carefully in our homes, we can focus on certain animal like qualities that we have, or would like to develop. Fetishes maybe used to discover, enhance or simply remember a connection with nature.They remind us of the instinctive wisdom of the natural world and all that we can learn by respecting and living close to nature and observing the ways of animals birds and spirits.

The Zunis feel that it is the spirit within each fetish that is of value, rather than the object itself and because of this fetishes should be treated with respect and occasionally given offerings of cornmeal. If you take care of them, they will take care of you!
Today many Zunis make a living carving fetishes that are also exquisite works of art in their own right. Certain families and individuals are highly regarded in the tribe for their fetish carvings and their pieces are particularly are sought after by collectors.
Carvers are often known to favour a particular animal, perhaps influenced by a tribal connection such as clan affiliation. The materials used are usually local rocks such as Zuni rock, serpentine, picture jasper, dolomite turquoise and jet but other materials are readily employed when available – deer antler, corals, shells and fossils as well as pipestone, onyx and lapis.