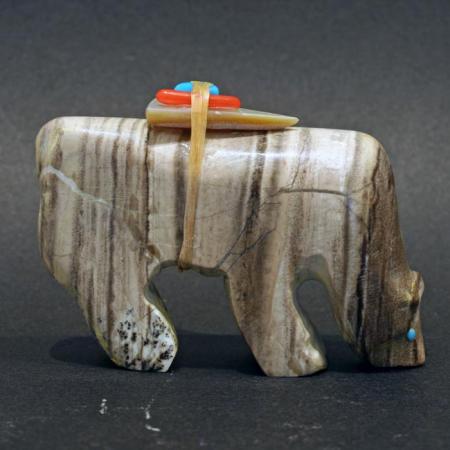 Zuni bear fetish carved from travertine rock by Jimmy Yawakia.Bear is protected by a mother of pearl arrowhead, red coral and turquoise. Jimmy Yawakia, whose family name means ‘falls in love’, carves with genuine respect in keeping with traditional old style fetishes. This Zuni bear fetish measures 5.5cm from nose to rump and 4cm in height.

The Zuni People are known for their fine pottery, jewellery and also for traditional, miniature animal and bird carvings known as ‘fetishes’. This deer carving is a fine example. A fetish is a ritual object, empowered by ceremony and imbued with spirits. Such power objects are believed to assist in healing, hunting, fertility and protection.