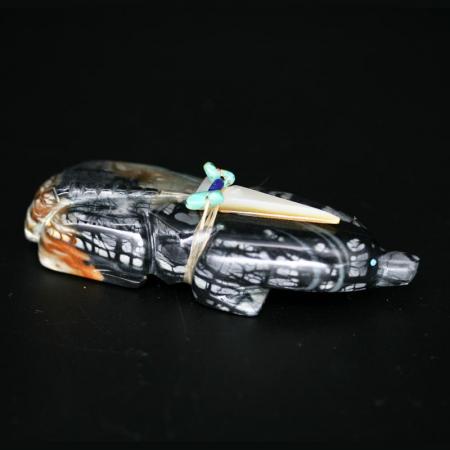 This handsome Zuni mole fetish is hand carved from polished picasso marble and protected by a mother of pearl arrowhead with turquoise. Mole measures 7.5cm in length.

This handsome Zuni mole fetish is hand carved from polished picasso marble and protected by a mother of pearl arrowhead with turquoise. Mole measures 7.5cm in length.

Moles derive their significance from ancient stories. Tradition says that moles aided humans in their emergence from the previous world and helped guide the Zuni people along their winding route to Idiwan’a.

Moles are guardians of gardens. They are familiar with the soil and plants knowledge. They hunt grubs that damage crops. They are intercessors between humans and the powers that originate below ground.