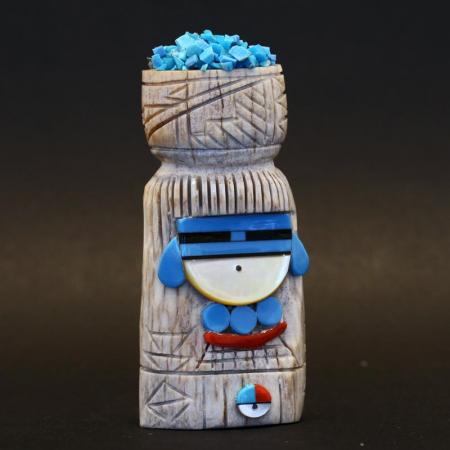 Zuni olla maiden fetish hand carved from antler, turquoise, coral and mother of pearl. The olla maiden caries a decorated clay water pot or ‘olla’ on her head. The round shape of her mouth indicates that she is singing a prayer song. She stands approximately 7.5cm tall.

Zuni olla maiden fetish hand carved from antler, turquoise, coral and mother of pearl. The olla maiden caries a decorated clay water pot or ‘olla’ on her head. The round shape of her mouth indicates that she is singing a prayer song. She stands approximately 7.5cm tall.

Zuni Fetishes are carvings that have been used by the A:Shiwi (The People) for over a thousand years. Originally fetishes were found objects that resembled animals and were then adorned with arrowheads, turquoise, coral, shells and feathers. Sometimes these natural forms were further enhanced to emphasise the appearance of the animal spirit within. As well as an animal a fetish may be a corn maidens or an altar maiden such as this one by Marvelita Phillips. Zuni fetish carvers gradually enhanced this process to develop a carving tradition of beautiful, characterful and sometimes intricate ritual objects.