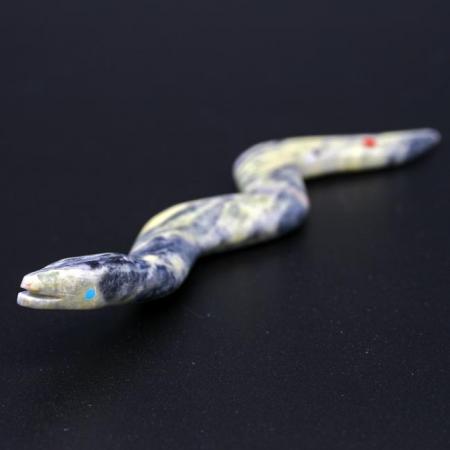 This Zuni snake fetish is sensitively carved from patterned green serpentine rock by Frankie Eustace. This undulating snake fetish measures 9.5cm from head to tail and has inlaid turquoise eyes and an inlaid red coral dot on the tail.

Snake medicine is that of transformation. The shedding of skin is a powerful symbol of the need to discard old ways, patterns and perspectives. Snake (Chitdola) symbolises life, death and re-birth and represents the lightning that accompanies rain.

This Zuni snake fetish is sensitively carved from patterned green serpentine rock by Frankie Eustace. This undulating snake fetish measures 9.5cm from head to tail and has inlaid turquoise eyes and an inlaid red coral dot on the tail.

Snakes shed their skin. This shedding is a powerful symbol of the need to discard old ways, patterns and perspectives. Snake medicine is that of alchemy and transformation. Snake symbolises life, death and re-birth and represents lightning. Snake’s swiftness and undulating linear shape resembles the lightning that accompanies rain, water is life. Snake travels in and out of the ground and is familiar with the lower world, including seeds and roots. These connections with both death and life make snakes powerful healers with curative powers that help us connect with primitive energies.