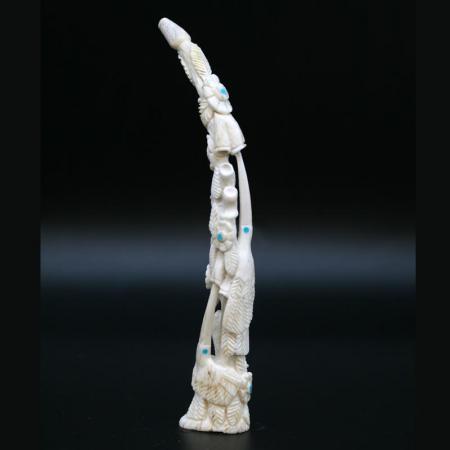 These enchanting hummingbirds are intricately carved from antler by one of our favourite Zuni carvers Destry Suitza. Destry is known for his extraordinarily fine detail as seen here in the feathers of the hummingbird and the flowers inlaid with turquoise. A true work of art. This exceptional Zuni fetish carving measures 12.5cm in height.

These enchanting hummingbirds are intricately carved from antler by one of our favourite Zuni carvers Destry Suitza. Destry is known for his extraordinarily fine detail as seen here in the feathers of the hummingbird and the flowers inlaid with turquoise. A true work of art. This exceptional Zuni fetish carving measures 12.5cm in height.