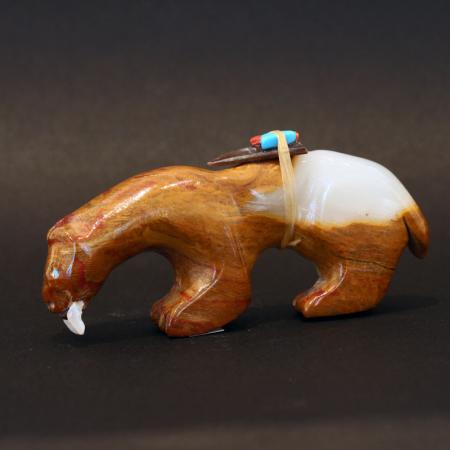 Sabre tooth tiger carved from onyx. Sabre tooth tigers were prehistoric animals now extinct. This animal fetish is protected with an arrowhead, turquoise and red coral. The impressive teeth are made from mother of pearl. The carver of this unusual fetish is Jimmy Yawakia. His family name means ‘falls in love’. This unique Zuni fetish carving measures 7.2cm from nose to tail.

Sabre tooth tiger carved from onyx. Sabre tooth tigers were prehistoric animals now extinct. This animal fetish is protected with an arrowhead, turquoise and red coral. The impressive teeth of this sabre toothed tiger are made from mother of pearl. The carver of this unusual fetish is Jimmy Yawakia. His family name means ‘falls in love’. He carves with genuine respect in keeping with traditional old style fetishes. This unique Zuni fetish carving of a sabre tooth tiger measures 7.2cm from nose to tail.